Martin Wikelski is late arriving at the Radolfzell air strip on Lake Constance because of a lynx. The feline lives in the Swabia Jura mountain range in southern Germany and wears a radio collar, but for the last 11 days, the radio receiver has been silent. Forest service workers turned to Wikelski for help.

As head of the Max Planck Institute for Ornithology in Radolfzell, Wikelski doesn’t just have an airplane and over 1,000 hours of flying experience: His Cessna 172 is equipped with technology for tracking animals that have been tagged with radio transmitters.

In his tight cockpit, the researcher balances the radio receiver on his knees. Antennas are mounted beneath the aircraft’s wings. Wikelski normally focuses his activities on migratory birds and bats, but every now and then he offers his services to the search for a missing wild cat. Once the mission is completed, he turns to his real task for tonight: For once, he’s not searching for animals, but imitating one — specifically, a common blackbird.

He quickly affixes a battery-powered radio transmitter under the plane’s left wing and takes off again. On the ground, his coworkers sit in two VW buses and listen to the signals sent from above.

The vehicles are equipped with impressive antennas that can be telescoped upwards to a height of up to six meters (20 feet). But after just a few minutes, Wikelski’s coworker Jesko Partecke sends him a text message: “We’ve lost you.” The researcher frowns in frustration.

The flight was supposed to be something of a dress rehearsal for the technology ahead of possible deployment just a few hours later. Wikelski’s team has tagged 24 female blackbirds with radio transmitters in Bodanrück, a forested area on the scenic west shore of Lake Constance. Each of the transmitters weighs just two grams and they are supposed to help track the animals as they fly south. Because the transmitters are also able to measure air pressure, the researchers will be able to measure the birds’ altitude in addition to their route, an added bit of data that has never before been collected.

Some 1.6 billion songbirds live in Europe and half of them fly south for the winter. The journey “takes place over the course of perhaps 10 nights in the fall,” says Wikelski. “There’s a lot going on in the air. It’s as full as the highway to northern Italy on Easter weekend.” About a third of the blackbird population in Bodanrück makes the trip, with females migrating in greater numbers than males.

On cloudless nights, the animals memorize the sky above their starting point before heading off. Sometimes they leave at dusk, sometimes after midnight. “Once the animals have determined their direction of flight, they try to fly as straight as possible,” Partecke explains. The birds then fly either across Lake Constance and Switzerland or toward the Black Forest and then onward to France. Depending on wind speeds and direction, the animals travel between 30 and 40 kilometers (19 and 25 miles) per hour.

Because researchers have previously marked blackbirds with rings, they know that most of them fly to an area at the base of the Pyrenees Mountains and winter there. Some birds, though, carry on to Spain or the Balearic Islands. 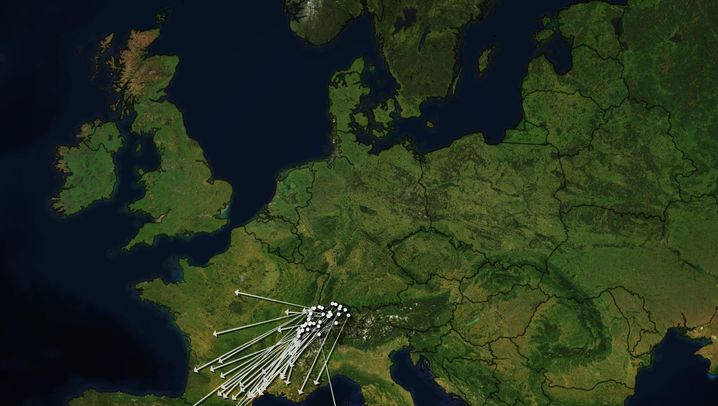 Photo Gallery: Where the Blackbirds Go

But some important questions have yet to be answered. How, for example, does a blackbird decide to migrate? How do they decide to suddenly switch from daytime to nocturnal activity and why do they decide they’ll take on the rigors of the journey, even if it means a weakened immune system?

“We want to know to what extent genetics and environmental conditions influence whether a bird migrates or not,” says Partecke. In their search for answers, the research team also draws blood samples from the birds they tag for genetic analysis.

One thing seems certain: The first blackbirds of the year could start their migration this evening. The researchers want to chase them in their vehicles. “It’s a kind of scavenger hunt,” Partecke says. “But you have to stay relatively close to the birds so as not

With Product You Purchase

I documented a week of pandemic takeout trash. Here are the photos.

Researchers Accidentally Got High on Laughing Gas From Penguin Poop

Forget my £2m art… just save Maggie the magpie from the flames!